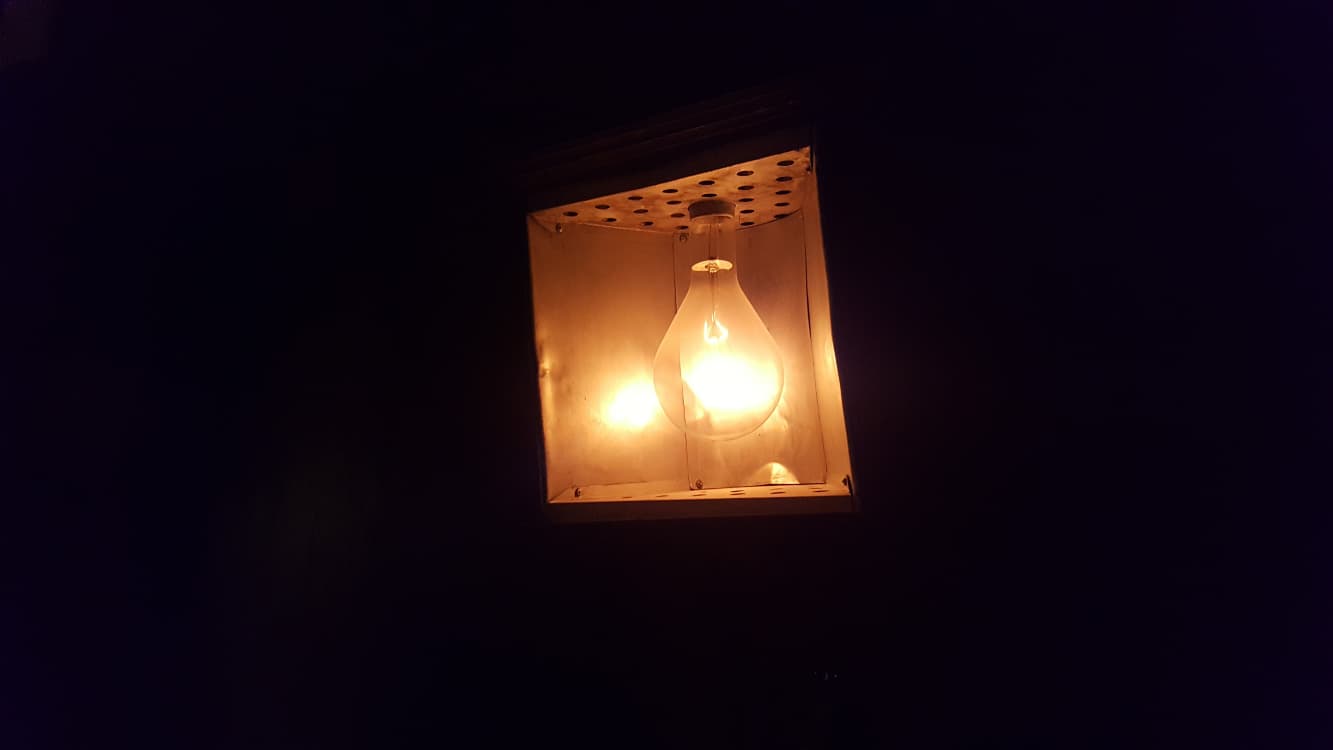 It has been completely rewired and is fully-functional. Great for your loft-space or stage production. Made in Canada by Perkins Electric sometime around 1928.

Need a new lamp? This one’s got a story…

Maurice Lacasse was born in Montreal in 1906 and studied dance at his father’s studio, which had been operating on Boulevard Saint-Laurent since 1895.

As a teenager, Maurice met Carmen Sierra. The two were immediately smitten and quickly married.

In the mid-20s, a Russian dance troupe was passing through town when one of their party was injured. Maurice replaced him and Carmen joined the troupe as well. Together, they toured North America for five years, during which they changed their name from Lacasse to Morenoff (Mor from Maurice; En from Carmen; Off for some Slavic flair).

They returned home in ’31, where they put on local shows and danced in nightclubs. Five years later, at the passing of his father, Maurice took over the family business and rebranded it as Studio Morenoff. There, Maurice and Carmen taught ballet, tap, and acrobatics.

Needing stage- and spot-lights for the studio, Maurice knew in his bones the importance of shopping local, so he reached out to Perkins Electric, a company founded in Montreal in 1928.

Could Perkins, Maurice probably asked, make him versatile wrought-iron stage lamps that could easily be tilted, lowered, or raised, so their bulbs could cast light near and far? Could slide-guides be fashioned to the front to allow filters? Could the bases be round so the lamps could easily be rolled to wherever they were needed?

Yes, yes, and yes, Perkins would have answered. “I have just what you’re looking for.”

The lamps were purchased and delivered and used with great success until the studio closed when Morenoff died at age age 80, in 1986, after operating as Studio Morenoff for five decades.

Exactly twenty years later, I was walking down Queen Street when I spied two of the lamps though the window of an art gallery. With no gallery name and no posted hours, I returned daily until the door happened to be open.

I went inside and headed to the lamps. They had no bulbs and were no longer functional having been stripped of wiring and their height-adjusting mechanism rusted shut. “Those aren’t for sale,” said the gallery owner. “Just decoration.”

“I said they’re not for sale.”

“Come on. What are you going to do with them?” I asked. He knew I was right.

We agreed on a price and a delivery date.

In a bizarre twist, years later, John would later become the landlord for both locations of my first record store, Good Music.

I hired an electrician who had a lamp shop on George Street just south of King. He came to me. He rewired the lamps with industrial cable, added a dimmer, and took a blowtorch to the height-adjusting mechanism. Everything works great now.

I found a supplier of vintage bulbs who had new old-stock of giant bulbs. They were expensive, but I bought two. At its dimmest, it’s like a campfire light. At its brightest, it can light up a city block. I’ve probably used it less than 10 hours total. It’s a normal socket so the bulb can be replaced with any regular bulb, including the old-timey replica ones that are available everywhere these days for a fraction of what this bulb cost.

Before getting into vinyl, I made part of my living selling vintage furniture. I immediately sold one of the lamps to a theater in Detroit.

The remaining lamp — this one — has been in my loft ever since. Now it can come live in yours. Because the story above is true, it’s a helluva a conversation piece.

If you’ve got a large space, or a loft, or a theater, you should buy it. Why settle for a light from Ikea when you can own some Canadian history?

Height is adjustable from approx 6 feet to approx 8 feet and anywhere in between. Width of filter gate (attached to front of lamp) is 2 feet. Width of base is 18 inches. Heavy, but can easily be rolled on the base while twirling the stand.

If you wanted to, I believe you could remove the filter gate, though I’ve never tried (it’s screwed on — screws are easily accessed). You can of course slide colored gels, or simply clip gels to the gate with clothes pins, something we did in film school — assuming you want to change the color of the light.

Obviously, this item won’t be restocked.

See below for more photos. 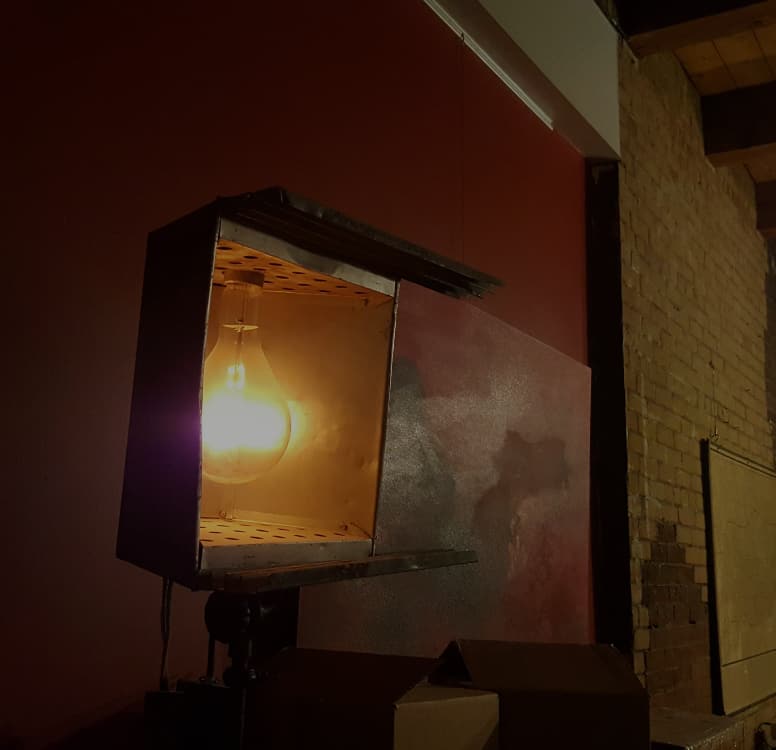 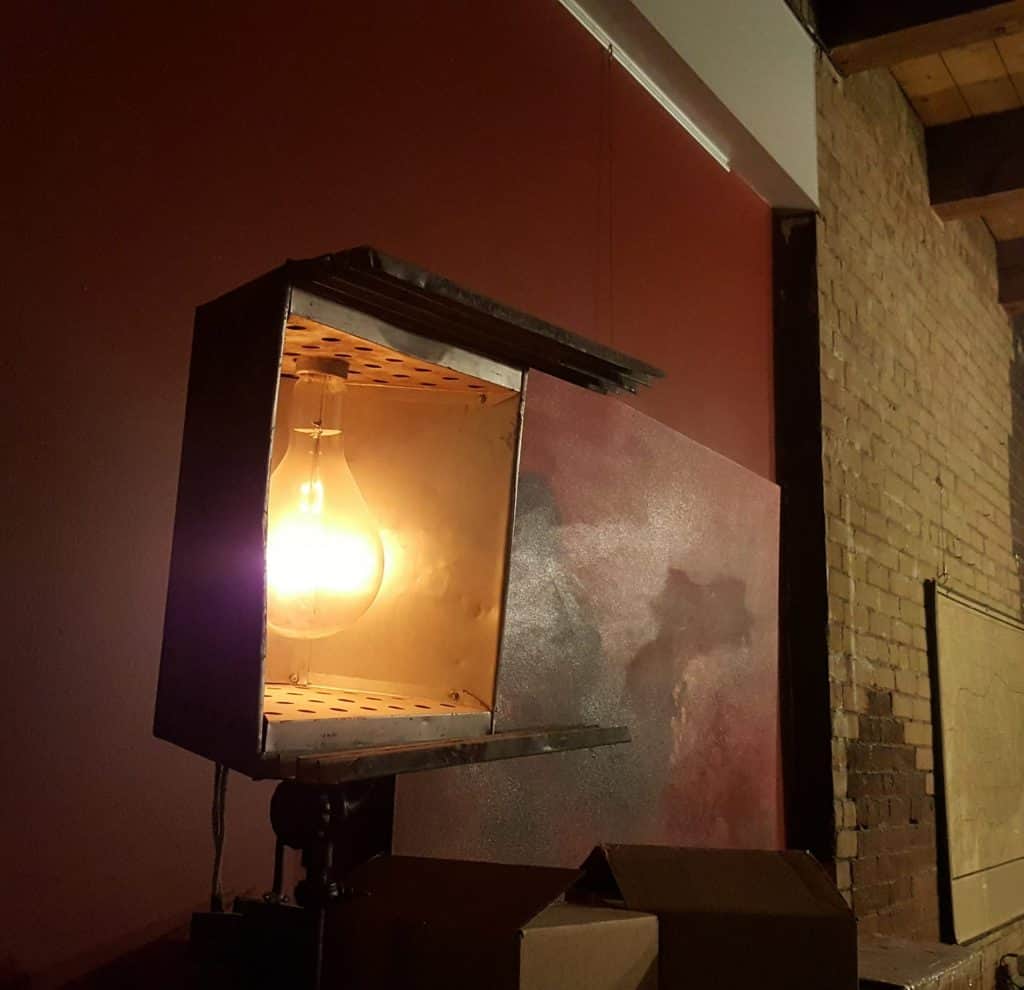 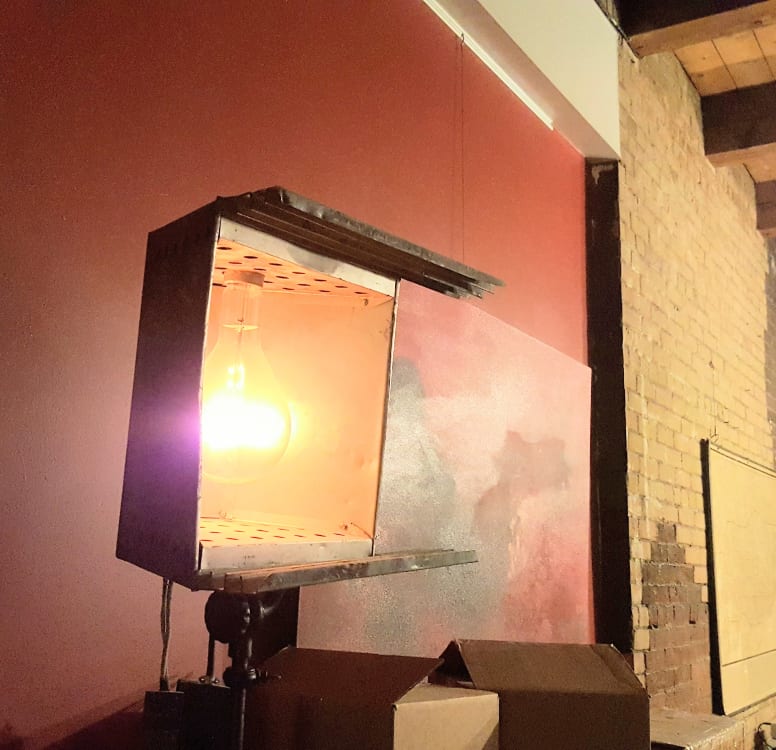 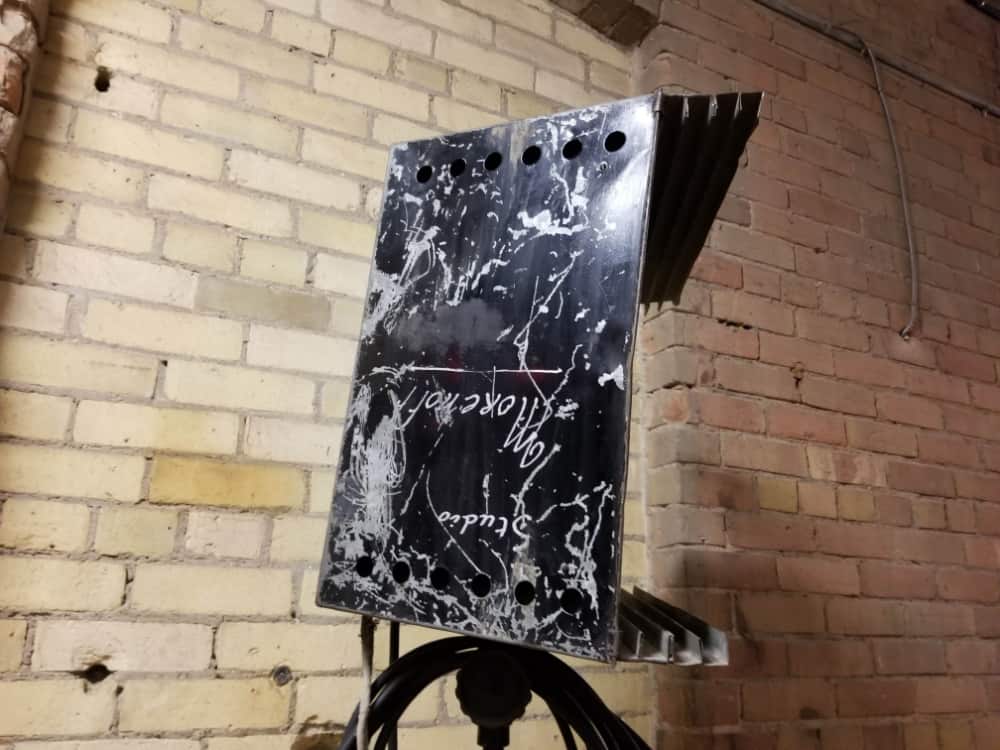 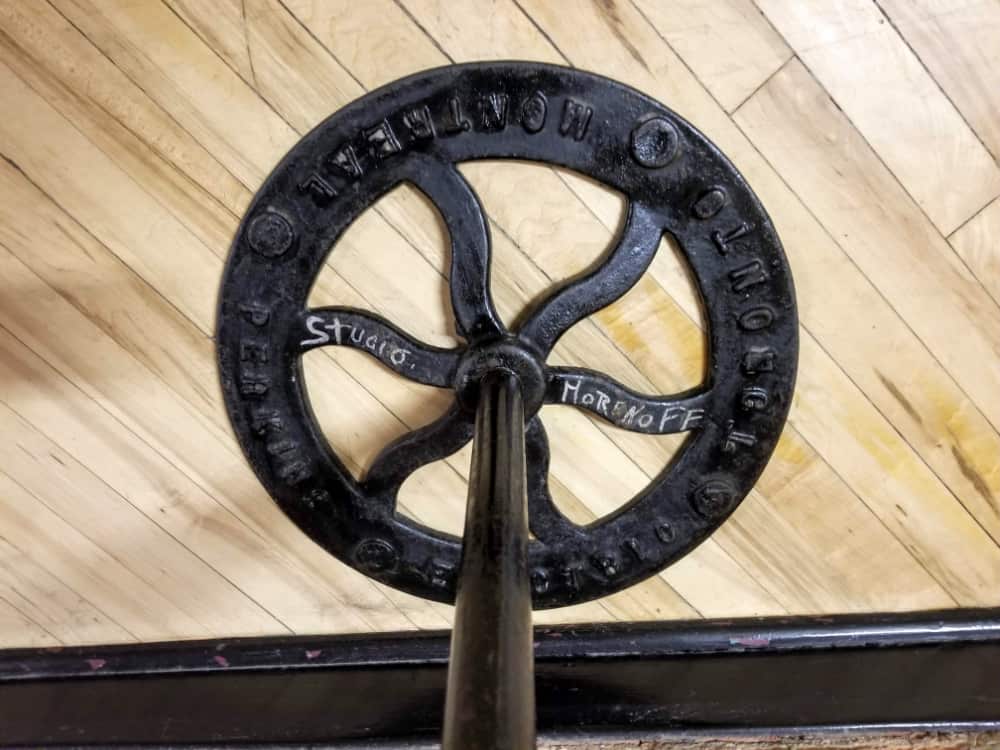 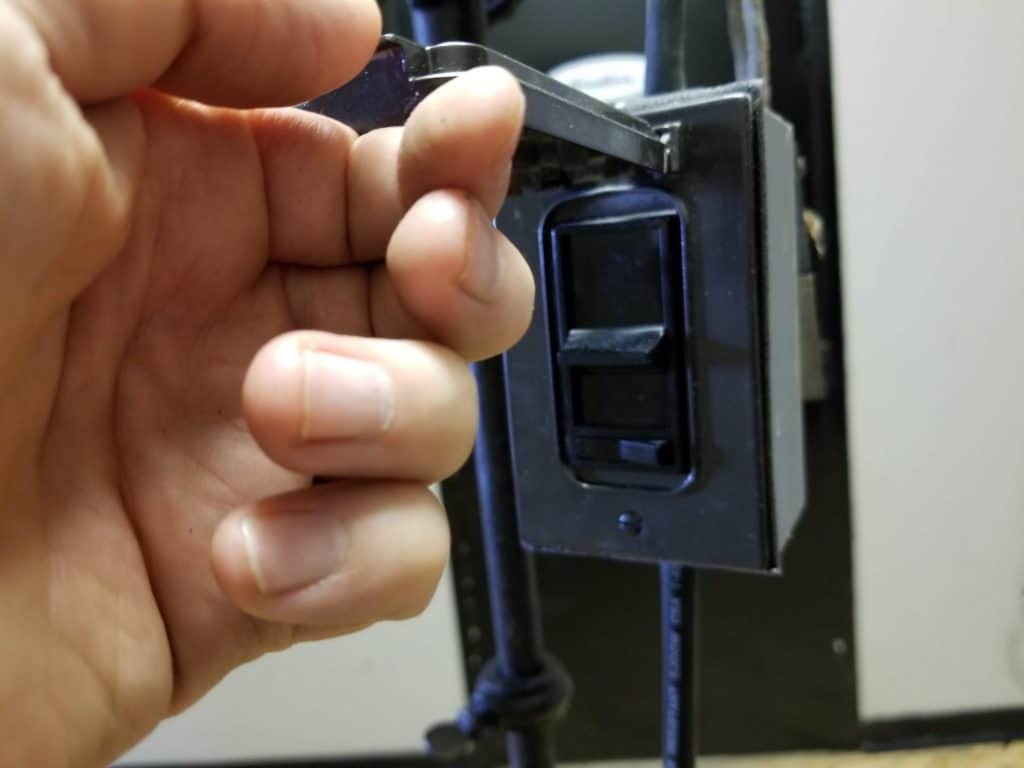 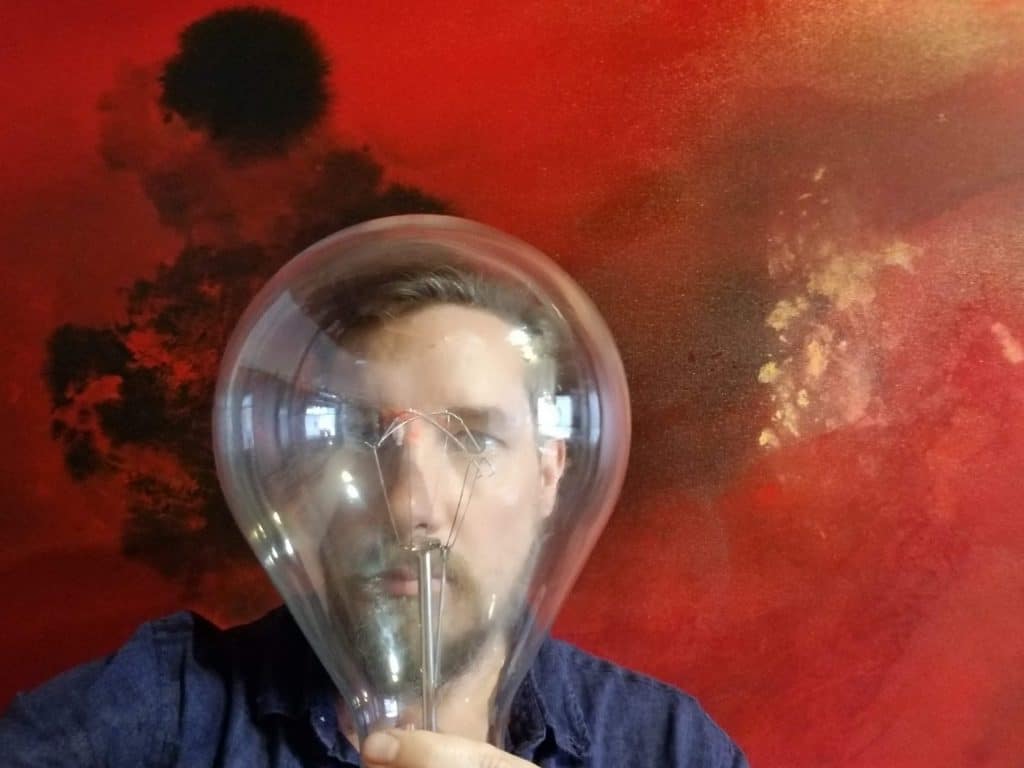